Radio by the numbers; and Ed Sheeran

Above: I got a thing! Now I have two of these that I can’t do anything with! Brilliant!

Numbers, we’ve all got them

RadioINK reports: “Radio’s audience still growing”; RadioWorld says "Nielsen Has Good News in May Numbers", AllAccess says Nielsen’s May 2021 PPM Survey Indicates Radio Audiences Continue To Grow As America Re-Opens, and it’s all good news for the US radio market. They’re all written uncritically from a press release from Nielsen, and all contain Nielsen’s graphs.

One thing stood out in the graphs: that March 2020 was described as “pre-COVID”. That seemed a generous description. New York City declared a state of emergency on March 12 2020; the New York Times reporting that by March 20 one in five Americans were facing lockdown.

It strikes me that February was, truly, pre-COVID: so I went digging for the numbers so we can see where we are. The numbers I found (backworked from the indexes, so may be inaccurate to a decimal place) might help show where we really are in “radio’s great rebounding”. I’ve drawn them on in purple. 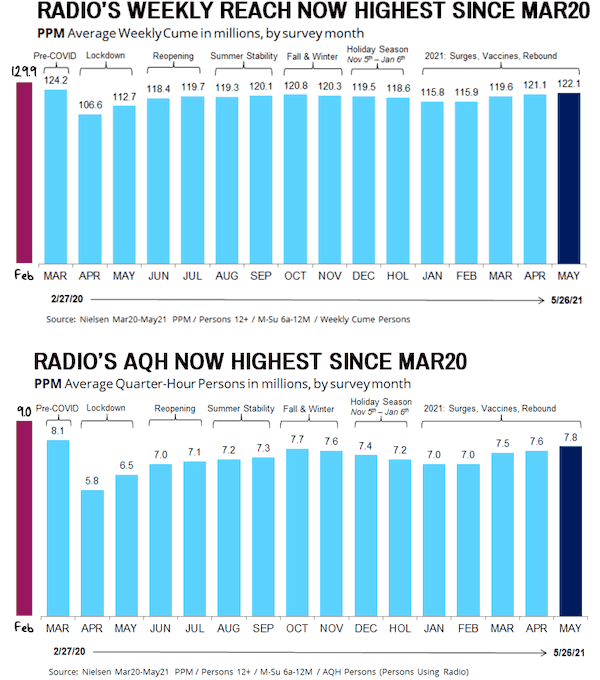 US radio is particularly (and unusually) reliant on in-car listening, so it’s probably no surprise that it took a hit. It’s great to see it come back. But I’m surprised about the claim that March was “pre-COVID”: and as you can see, the true pre-COVID numbers show we’ve some way to go.

I’m also told that the 5% jump you can see in October for AQH is the effects of the “headphone listening adjustment”, where they add a bit of numbers in their estimates to account for headphone listening, which isn’t measured by the PPM.

(If I were working for Nielsen, I’d have started this graph from April. Wouldn’t you?)

Your station’s music: and nothing else

On Spotify, the user ohrenweide is doing a fun thing: automatically monitoring a bunch of radio stations like FIP, BBC Radio 6music or KEXP: and adding the songs they play to a Spotify playlist. I quite often listen to the 6music one, but sometimes catch it while 6music is in specialist programming, which wasn’t brilliant without the context, so I asked ohrenweide whether it was possible for them to create a 6music weekdays playlist. And they have (along with Radio 1 and Radio 2).

I dropped these to Sean Ross, since I thought he’s be interested in them; and he and I kicked around a few ideas.

Particularly, I wondered whether there was an HD2 channel idea here. If you really liked BBC Radio 6music’s music choice, but without the earnest chat, news bulletins, promos for other things, and other clutter, then is there something in a service called “6music non-stop” as an additional channel: when you just get the music and nothing else? Would that actually allow you to add a little more personality to the station, knowing listeners can stay with your service - but just turn the waffle off - if that’s what they want?

Sean’s written a full article on it; and sees some opportunity, but adds that for this to work: “Radio would have to be consistently hosted 24/7 for those who wanted it. There’s potential in a mute button, but not if broadcasters are already muting themselves.”

Ed Sheeran is a good sport when it comes to promotion. I remember finding this from Hamish & Andy a while ago: a slightly strange “prank” where Hamish dresses up as a peep show owner and hustles on the street for an “Ed Sheeran Peep Show”, only for the unsuspecting couple to suddenly realise, to their delight, that it really was Ed Sheeran. For thirty seconds. For their $2.

Last week, Heart had a lovely story of a kid and his grandfather, together after a long period of isolation, telling a story of the kid playing him Ed Sheeran songs. Kid is asked to play, and as he does, Sheeran appears. It’s lovely.

Next door at Capital, celebrating “Junemas” because we didn’t have a proper Christmas last year, Sheeran does the same to an NHS worker, bursting out of a cake; and Sheeran also takes part in a quiz about The Simpsons and is taken aback when voice-of-Bart-Simpson Nancy Cartwright asks the questions.

Things to learn: great radio moments don’t always come from humiliating other people; would anyone have shared these if they were just audio?; and good camera angles and sight-lines for video content makes an amazing difference. Bravo, Global.

I gave the website a bit of a kick: not quite right, but it’s getting better. So that’s nice. And hopefully this email looks a little nicer, too.

Thank you to Dusty Rhodes and to Evan Kaldor for your kind support last time (yay, two excellent people!); and to Hausa Dictionary, Richard Hilton, and Brun Audio Consulting for your ongoing support of this newsletter. I’m very grateful to you.

It’s absolutely not (that) necessary, but if anyone wants to support my work in any way, you can BuyMeACoffee - become a member to give regularly or just give a one-off coffee if you’d like to support me in some way.