Business partners from the start. Our podcasts are ‘joint venture’ - you focus on presenting, we take care of everything else - and share in your success. Find out more about Podcast Partners

Above: The Podcast Show 2022, in London. An impressive and super-busy event. Delighted to have taken part in this; and delighted, too, to see this debut event being so well attended, with more than 2,600 attendees per day.

The BBC has announced a number of cuts to its services. I learnt about them at the Podcast Show in London, coincidentally just after recording an episode of BBC Radio 4 Extra’s Podcast Radio Hour, which will air next Friday.

Looking at the changes, they seem pragmatic and sensible.

AM to be turned off

BBC Radio 5 Live is to cease its AM transmission - something that doesn’t even get mentioned in the BBC’s own press release, and BBC Radio 4 will come off Long Wave.

Back in 2014, 54% of BBC Radio 5 Live’s weekly reach was already on DAB. The government’s own review, published last October, recommends that broadcasters “develop a plan to retire” AM services, says that less than 3% of radio listening happens on the platform, and publishes this graph showing AM’s decline. 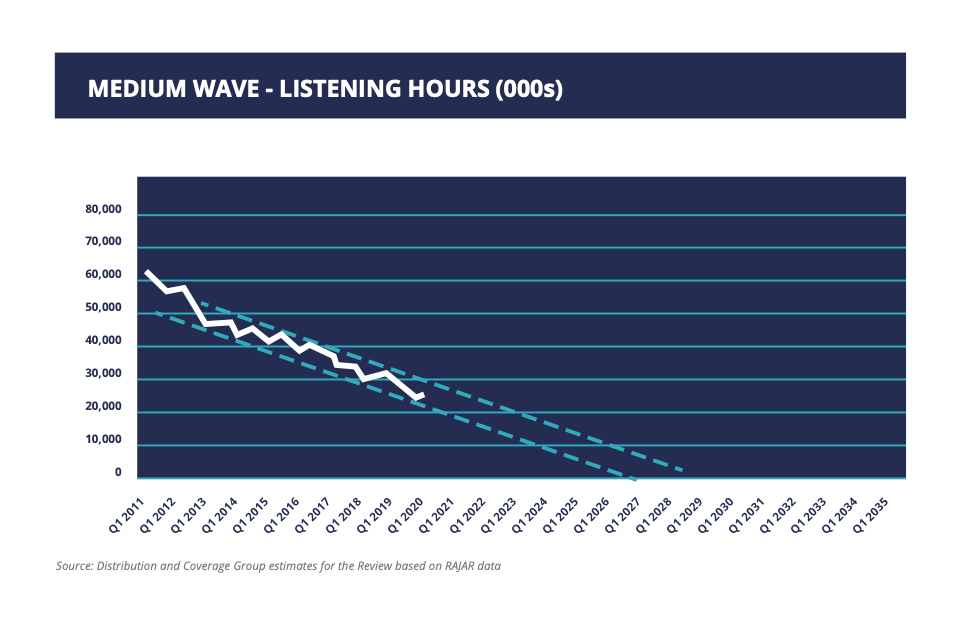 AM is very expensive to broadcast (mainly the electricity costs), and it’s no surprise that the BBC plans, quote sensibly, to turn that off.

Archive to come off linear

BBC Radio 4 Extra, and BBC FOUR television, will cease to be broadcast.

Archive channels like these are better suited for on-demand anyway: the brands might be retained for curated playlists within BBC Sounds and BBC iPlayer respectively.

It’s unlikely that this means a reduction in the availability of that archive programming: just that it won’t be available in a linear broadcast any more.

Archive programming, by its very nature, doesn’t really benefit from live, linear broadcasting; and even if there are relatively few savings to be made in terms of transmission costs, it makes sense to make the archive more focused on on-demand. That will need Ofcom permission, since iPlayer has a maximum number of archive series that it’s allowed to have available; but you’d assume they’d be comfortable with that.

The BBC runs two TV channels: BBC News, a domestic 24-hour news channel, and BBC World News, the international news channel, which is funded by cable carriage fees and advertising. The plan is to merge the two, and call it “BBC News”.

BBC World News doesn’t seem to answer any particular audience need: it’s a quite dull channel, full of stories about countries I’ve barely visited and information I’ve no need to know. It covers precious little about the UK, and that’s odd.

Regular readers will know that I found BBC World News’s coverage of the crisis around the Brexit parliamentary votes was significantly lacking; and there’s precious little coverage of Partygate and the state of the British economy on that channel, either. It strikes me as irritating that in order to learn about Britain, I have to watch Sky News UK, rather than the BBC.

Dare I also say that BBC World News significantly under-performs in the BBC’s charter purpose because it insists on making itself available on pay-TV only. I can’t legally watch the channel unless I pay money to Fetch or Foxtel here in Australia; yet I can watch GB News, Sky News UK, TRT World, RT, CBS News, and plenty of other channels for free. I wonder whether the increased influence in making BBC News channel free on all platforms would be a benefit to the UK?

Not done by halves

What’s most impressive is that this isn’t a begrudging cut by the BBC to squeeze under a £285m shortfall. These cuts will actually contribute to savings of more than £500m: and to refocus the corporation on platforms that are growing, rather than platforms which are shrinking.

And while it’s another unsettling and uncertain set of changes for BBC staff - who have rather more of these changes than others - I think these changes are good news for the BBC, and for its consumers.

I’ll be at Canadian Music Week next week.